Tim over at Assorted Stuff pointed me to Google’s blog post that recommends that students major in learning.  Here’s the short list of skills for which they look in new employees:

As I read the post, I thought about the keynote I’m doing next week in Franklin County.  I’m including a section about 21st century skills.  For awhile now, I’ve been doing a crosswalk between Tom Friedman’s list of skills and the 21st century skills: 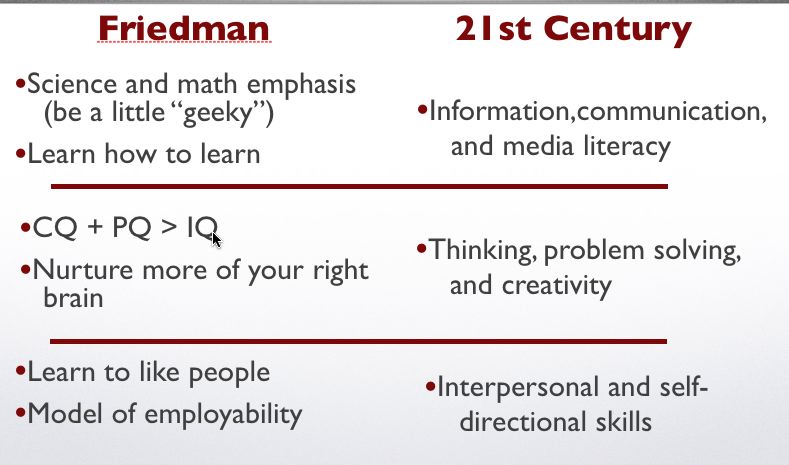 It’s easy to see where Google fits right in and I’ll certainly be adding them to my presentation. (Thanks, Tim, for your very timely post.)  By the way, for those who haven’t read Friedman, CQ + PQ > IQ stands for Curiosity Quotient and Passion Quotient which are greater than Intelligence Quotient.

But, I’ve also been taking this a step further.  Google includes “leadership” as one of its skills and I would suggest that all the skills are leadership skills.   Reading the lists reminds me of my favorite leadership writer, Warren Bennis.  I use Bennis for my email signature:  “People who cannot invent and reinvent themselves must be content with borrowed postures, secondhand ideas, fitting in instead of standing out.”  When I started playing with Tumblr again this week, I started by posting more Bennis quotes.

On Becoming a Leader

is his classic work. He lists the following characteristics of leaders:

Note the similarities, and this from someone writing in the 20th century.  Maybe the skills needed to survive in the 21st century are not so different from those needed in the past. I think the major difference now is that we are beginning to understand that these skills are needed by everyone, not just those who are heading to CEO land.  As Tim writes, “That list of factors would pretty much prepare students to work almost anywhere.”

All this thinking about leadership was reinforced for me as I sat at a stop light the other day. I happened to glance at the landscaping truck next to me.  It was advertising employment opportunities and underneath the phone number was the following statement: “We want leader not laborers.”