My afternoon was moving along nicely, promising lots of time to grab a drink and work on my trail map. Then, after a dog walk near the pig pens, I discovered several baby pigs suffering from dehydration in the heat. One ended up in the “emergency room,” otherwise known as my den. I’m happy to say he has recovered and been reunited with mom and siblings. But somehow it turned into 8 PM and I had not worked on my trail at all. So, I have decided that what I have done so far is just going to have to be good enough.[1]
I didn’t want to do a screenshot of my history as it seemed to be too messy. I did do a collage of some of the tabs that were opened during this research: 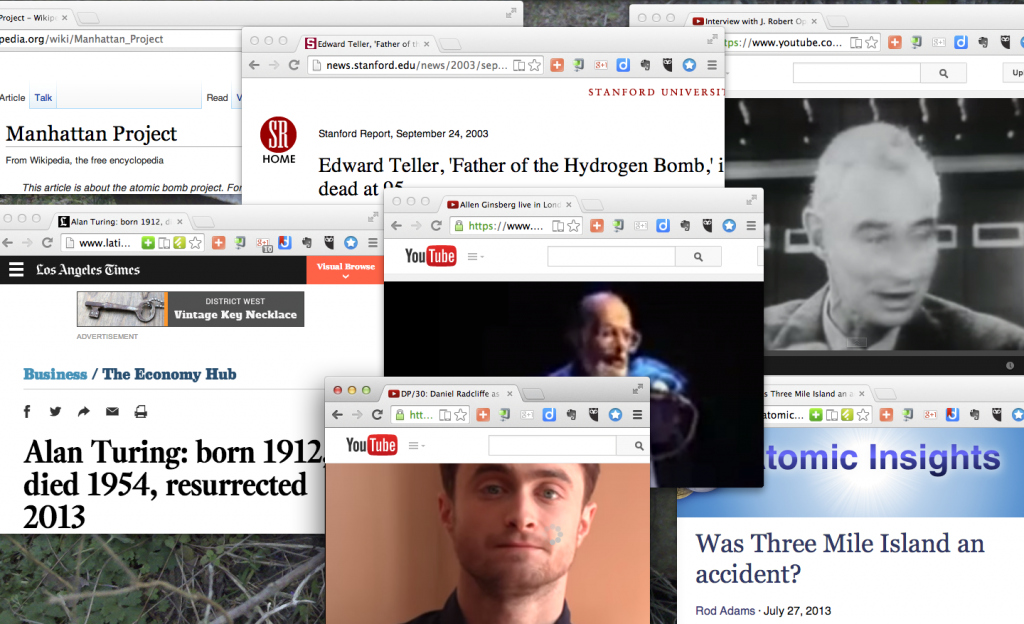 I then created a mind map but just couldn’t find the time to make it interactive. Here is the trail without any of the links I wanted: 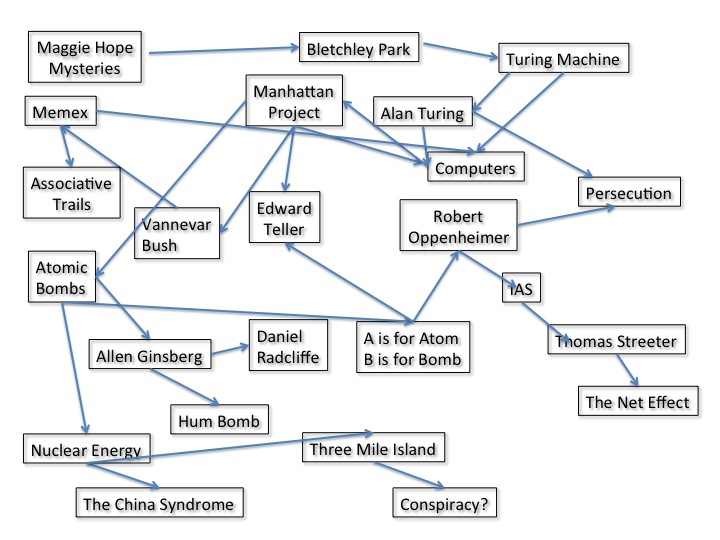 It starts officially in the upper left hand corner. I really started this trail last summer when I began reading a mystery series set during WW II in England. The main character, Maggie Hope, is a mathematician who has ended up in England as the war begins. She starts as a secretary for the Prime Minister but proves her problem solving abilities and soon becomes part of MI-5. We learn about Bletchley Park and the Enigma Machine. I brought this interest with me to the summer MOOC.[2]

Other pieces of the trail that could use some explanation: I was a senior in high school and working at the Lancaster County Tourist Bureau when Three Mile Island melted down. We were just on the edge of the area of concern and many people left town anyway. It was a frightening time with evening updates on the news. The China Syndrome, a story of a meltdown at a nuclear power plant, had only been released 12 days before the disaster and locals left the theater shaken after hearing the infamous line about the disaster destroying an area the size of Pennsylvania.[3] The surprise in my searching was that there are people who consider Three Mile Island to be a hoax intended to sell more tickets to the movie.

Growing up during the Cold War meant worrying about the possibility of a nuclear war. I was fortunate enough to hear Allen Ginsberg at McCabe’s Guitar Shop in Los Angeles in the mid-1980s where he sang his Hum Bomb poem. Looking for recordings of that poem led to a video clip of an interview with Daniel Radcliffe who played Ginsberg in Kill Your Darlings.

The video I could not find online was A is for Atom, B is for Bomb, which we watched in my physics class senior year. An episode of NOVA, it had just been released and profiled Robert Oppenheimer and Edward Teller, two of the architects of the atomic bombs. Oppenheimer seemed to regret his participation while Teller reveled in it, sure that such horrible weapons could somehow ensure peace.

Just before beginning the course, I started reading Turing’s Cathedral: The Origin of the Digital Universe by George Dyson. This book describes the creation of computers, focusing on the work done at the Institute for Advanced Study (IAS), founded before the war and still in existence. There is a great video clip of an Edward Murrow interview with Robert Oppenheimer who served as director of the IAS for many years where he talks about the IAS being a place where great scientists and mathematicians could come to get away from the usual demands of academics, mostly teaching.

In poking around the IAS website, I found a very intriguing paper by Thomas Streeter, a sociology professor at University of Vermont who spent a year at the IAS. Called The Net Effect: The Internet and the New White Collar Style, it describes the changes in rhetorical styles due to online communications. And as trails often do, this one seems to double back on itself by quoting JR Licklider, who I should have read for this week.

One final comment about the persecution trail: Robert Oppenheimer, resistant to the development of the hydrogen bomb, was stripped of his security clearance, with many of his former colleagues testifying against him including Edward Teller.  Even worse was the story of Alan Turing who was chemically castrated as a treatment for being homosexual. He committed suicide not soon after at an early age. It seems that being a national hero is no protection.

Eventually, I will get some links put up, most of them going to books I plan to read related to these various parts of the trail.

[1] I hate it when students ask if an assignment is “good enough.” I often respond by asking them what they think.
back

[3] The associations continue even as I write this post. I went out to see if I could find out which character uttered that line and found a website commemorating the 35th anniversary of Three Mile Island which was this year. It featured the stories of those who lived through the event and included someone talking about see the movie.
back